Dropbox is the easiest way to store, sync and share files online. The app works just like any other folder on your computer, but with a few differences. Any files or folders inside the tool will get synchronized to Dropbox's servers and any other computer linked to your account. Green checkmarks will appear on top of your files to let you know that they're synced and up to date. All data is transferred over SSL and encrypted with AES-256 before storage. It keeps track of every change made to any of its contents. It's free to download and use 2GB of online storage for free, with up to 1TB available to paying customers. 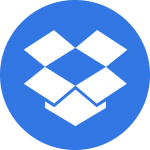 Take your docs anywhere
Save files on your computer, then access them on your phone from the road. Everything you keep in Dropbox is synced automatically to all your devices.

Send videos quickly
Send your entire wedding video to the family with a simple link. It’s easy to share large files with anyone — even if they don’t have an app account.

Keep your photos safe
Back up vacation photos automatically from your phone or computer. That way, memories are safe as soon as you make them, and you can relive them from any device.

Work on slides together
Edit a presentation with teammates without emailing files back and forth. When you edit a file in a shared folder, everyone gets the update automatically.

Never lose a file again
Left your phone on the train? Your photos, docs, and videos are safe. Just sign in to Dropbox from any device, and your files will be there waiting for you.

Note: You can store up to 2GB of data using a free account.

Dropbox 101.4.434
- The desktop client is regularly updated with many improvements and fixes

Dropbox 100.4.409
- The desktop client is regularly updated with many improvements and fixes

Dropbox 99.4.501
- The desktop client is regularly updated with many improvements and fixes

Dropbox 98.4.158
- The desktop client is regularly updated with many improvements and fixes

Dropbox 95.4.441
- Optimized local file event latency under some conditions (including during startup)
- Updated mac Finder tooltip text over Ignored files from "selectively synced out" to "ignored"
- Modified collaborator avatar order under Shared Content of People Pages in Collab Browser. It now has the current user's avatar be first, and the collaborator's avatar that the user looking at be second.

Dropbox 94.4.384
- Fixed an issue where newly added or edited files were not reinheriting permissions of their parent folders on Windows

Dropbox 92.4.382
- Added gated link settings for cloud docs
- When creating transfers, users can now set whether they want to receive notifications whenever someone downloads the transfer
- Improve compatibility with some antivirus providers
- Some users will see a new item, "Open with Web", in the context menu obtained by right clicking on most Dropbox owned Microsoft files in Finder/Explorer. The sub-options in this new menu item will allow the user to open the file in a cloud editor of their choice. Current sub-options are "Google Docs" and "Word for the web"
- Fixed one instance of a rare bug where old notifications would permanently stick around in the tray even if you dismissed them

Dropbox 90.4.307
- Fixed a rare issue where users' files wouldn't sync down until they paused/unpaused or restarted
- Added additional guidance to help reply to comments on Google Doc, Sheet, and Slides files
- Fixed accessibility issues with the sharing modal's member list both a) making the screenreader read out the information in the member - list, and b) making the rows and columns counts listed in the member list accurate.
- Fixed security issue in DropboxUpdate